Down in the Dumpster 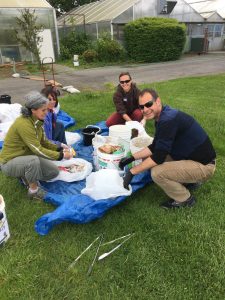 The consensus among my peers remains that while working as waste reduction professionals is a noble cause, it is often a challenging, stinky, and thankless endeavor. Negotiating the morass of behavior change, constantly shifting commodity markets, and general ignorance can try a person’s perseverance. At least currently, there are no equivalents of flashy interactive energy modeling displays; the James Beard Chef’s awards; or LEED plaques for star performers in the waste reduction world. It is often by sheer force of will and conviction that we once again don the nitrile gloves, pull out the blue plastic tarp, and begin sorting and separating various bits of waste to illustrate the depth of the issue and opportunities for improvement.

Despite the fact that reducing waste, and particularly food waste, is one of the top three ways we can mitigate climate change, the emphasis and value placed on this sustainable practice ebbs and flows. Part of this is due to the nature of our waste hauling systems, especially the United States, and that our waste haulers are very good at making what we discard magically disappear. Recently, I was giving a Toward Zero Waste presentation to a sustainable-minded business and I asked one of my standard questions, “Do you know where the waste you cart to the curb actually ends up?” A somewhat sarcastic response from one of the employees was, “It just vaporizes.”

I was grateful for the provided segue and used it as an opportunity to heighten some awareness. The rest of the responses indicated an overall lack of awareness we face when connecting back to our “waste reduction why”. Out of the nearly 20 people in attendance, only two people were aware no public or private landfills are presently operated in Whatcom County, so consequently we ship literally tons of waste to Roosevelt Regional Landfill over 300 miles away – DAILY. The same ratio of employees were unaware of where our food and yard waste actually ends up. They were summarily surprised to find it may have very well ended up in their own garden via the transformation by our local, Lynden-based, commercial composting facility, Green Earth Technologies. 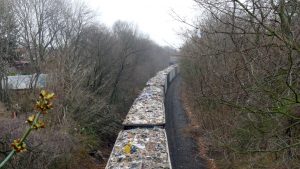 The above exchange illustrates one of the major challenges in the work we are doing. The public just does not know the depth of the issues surrounding waste. I guess it is somewhat inherent to what we are trying to accomplish. The end result of our work, when done right is not an new Living Building, solar array, or local menu item. Quite the contrary, and somewhat paradoxically, the result is next to nothing.

One thing is certain–this line of work is important and has great ramifications for our economy, environment, and future generations, and your friendly waste reduction professionals are at the forefront. The good work we do does matter even though it pains us when we encounter indifference, another entirely edible apple in the garbage, or the fully functional discarded desk in the dumpster. At times, we may be down in the dumpster literally and figuratively but we are hardy folk and not easily deterred. Elevating the conversation in public presentations and behind the scenes in kitchen prep areas and garbage enclosures, we press on seeking to spur the positive change necessary – we hope you join us and do your part to reduce, reuse, and recycle!