Local Collaboration for the Win!

It was with great trepidation I listened to the presentation at our last Solid Waste Advisory Committee meeting. The discussion centered around the ramifications of what may come to pass as we looked at the impending closure of a longtime recycling business, NW Recycling. Their representative shared they were calling it quits after decades of operating in Whatcom County. The closure was not completely unexpected but nevertheless like so many things when the finality of it all comes to the fore it is a bit jarring.

NW Recycling has served our community well for decades but their location on C Street in Bellingham had become what is considered a “non-conforming use” in the sub area plan for the Old Town District. What does that mean in laypersons speak you ask? Basically, it means that having a recycling facility and associated operational realities like large amounts of truck traffic and heavy industrial noise was no longer conducive to an area that was now zoned for light industrial, mixed use commercial and some residential uses. 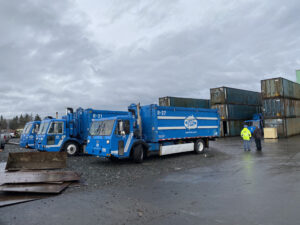 While NW Recycling was considered a pre-existing business, and could continue to operate in this location, the City had offered some significant development incentives if they were willing to relocate their business to a different area. Those incentives we set to diminish with the passing of time. It appears the impending diminishment of incentives, the current challenging state of recycling, finding a new location and associated length of the permitting process led to a decision to close the recycling facility that for decades has served as the processor for the City of Bellingham’s municipal recyclables.

This set off alarm bells in my brain! Would our long time three bin, source separated recycling system be all for naught, even though this system has proven to be the best way to reduce contamination, increase recycling rates and insure what is collected actually gets recycled? Our system was one of the few that still held much value in present day because our recycling was clean and contamination free as recycling markets shut down around to single stream systems.  Single stream recycling is system were recyclables are all mixed together – paper, tin, aluminum, glass, cardboard and plastic. It is the system many of our neighboring counties to the south employ. This system is less effective, has more residuals (trash and other non-recyclable stuff left over) and the thought of going backwards was distressing to say the least.

Thankfully, burgeoning partnership between three local companies working together to find the best possible solution to maximize recycling in our community came to rescue. Our longtime local waste hauler Sanitary Services Company (SSC) will now haul our recyclables to the Ferndale based business, Slater Road Lautenbach Recycle Park (LRP) located within the Parberry Environment Solutions’ Scrap-It / Stow-It Industrial Park, which will serve as the baling and transfer station. Lautenbach Recycling will process and sort the materials and insure we have clean streams of recyclables that will be attractive and valuable on the resale markets.

Residential and commercial customers will notice little, if any, changes in their waste services. We are fortunate to have local business collaborating with a shared commitment to reduce the amount of waste our community sends to landfill. Definitely a local collaboration for the WIN!