Sarah Chan, owner and chef at Calypso Kitchen, knows how food can tell a story. And the food that comes out of her kitchen tells one rich with flavor, commitment to local farms, and deep compassion. Originally from Trinidad and Tobago, Sarah is passionate about sharing the cultural and culinary legacies from the Caribbean – and also celebrating the abundance of the Pacific Northwest she now calls home.

Her work takes many forms, from running a successful catering business to lines of sauces and spices to cooking classes. “My classes are about teaching traditional methods of cooking and how to use ingredients,” Sarah explains. “I also use the classes as an opportunity to talk about the country that I’m from and to promote our foods and culture. Food and people blended to create the cuisine that comes out of the Caribbean. My classes are about being an ambassador, for people to see the Caribbean not just from a ‘tourist’ or ‘third world’ perspective.” ow calls home. 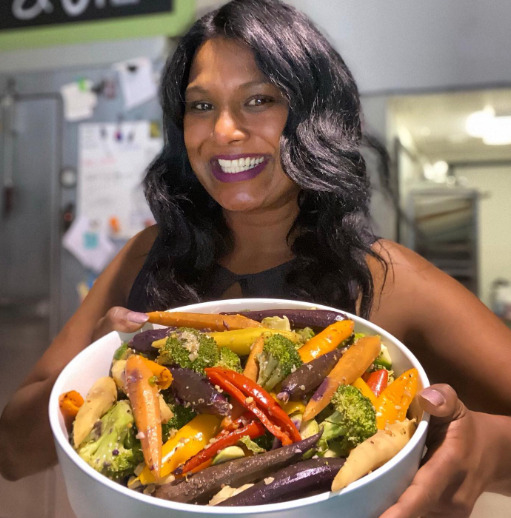 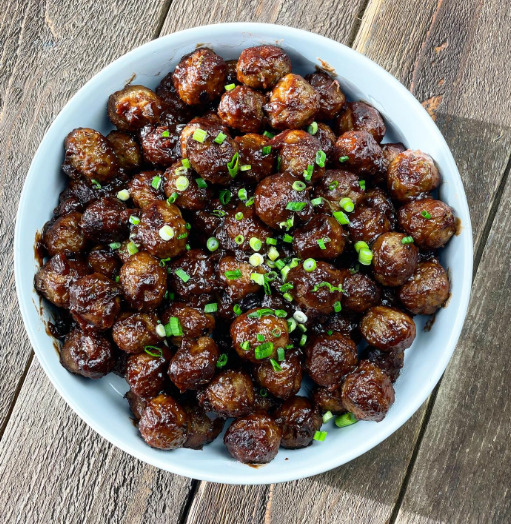 Sarah celebrates Trinidad and Tobago through her food. She also acknowledges that the challenges the country has endured have contributed to a vibrant culinary culture. “The islands I’m from have used our negatives, like slavery and indentured labor, to pivot and create our Carnival, our food, and our culture. We are people that work hard, and we party just as hard. Food is really a big part of that.”

So what makes this kind of food so special? For Sarah, it comes down to the diversity in the population of Trinidad and Tobago, though she recognizes that diverse populations around the world create their own unique cuisines. “Our population started with native Arawaks and Caribs, and then there was colonization, with British, French, and Spanish coming through. Then we had the African slave trade, then Indian and Chinese indentured laborers, and then huge populations of people from the Middle East and Europe. Constantly we have new populations of Chinese, African, Indians, and Middle Easterners coming into the country.”

The Trinidadian food culture is shaped by these generations of different ethnicities and cultures migrating to Trinidad and Tobago, bringing their own foods and spices, and melding them with what grows locally. “We blend a lot of our own spices, and every household has its own blend,” Sarah says. “We also use a lot of fresh herbs. We really take it to another level, and a lot of them grow uniquely in the Caribbean. The whole gastronomy is based on everything being melded together and creating something so different and unique.”

When Sarah relocated to the Pacific Northwest, she brought that unique gastronomy and added a local twist. Eating local has always been a part of her life, and Calypso Kitchen continues that journey and shares it with the Whatcom County community. 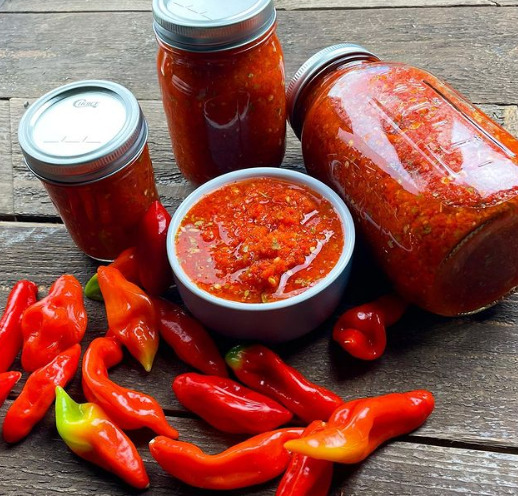 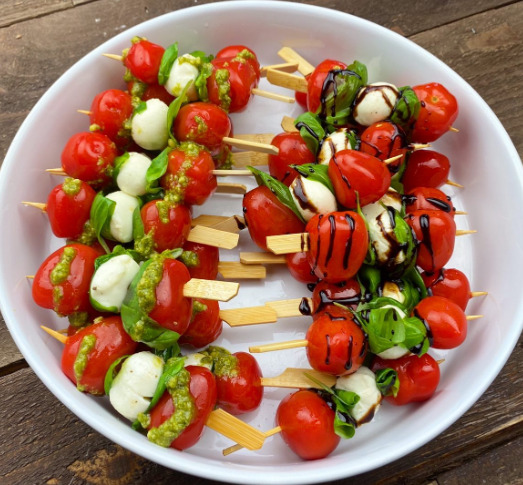 As Sarah recalls, “I grew up in a family that had no material wealth, but we did have an abundance of land. My family were farmers that worked that land, and my grandmother on my mom’s side had a big backyard where she grew her chickens, goats, ducks, and gardens. There were acres of fruit trees. I grew up eating off the land, and not really thinking that not everybody can just go into their backyard and get breakfast or dinner. This created a mentality in me that you eat what grows around you. I grew up with this mentality and grew into it.”

And while Sarah knows the importance of eating and sourcing locally, she also understands that it’s something that not everyone can afford or access. “I often teach free or low-cost classes to reach part of our community that possibly can’t afford to go to the farmers market or farm stands. I want to teach them that wherever they’re getting their food from, they can use what they have to make really good food. If they’re getting their produce and dried goods from the food bank, I want to be able to show how you can make really delicious, healthy food.”

Sarah’s cooking classes, which have taken place at her home and the Community Food Coop, along with her exposure from the Bellingham Farmers Market and Sustainable Connections, have given her a platform in the community to share her food and her values. Calypso Kitchen currently operates out of a commercial kitchen shared with Salt Pepper Oil, another local food business. 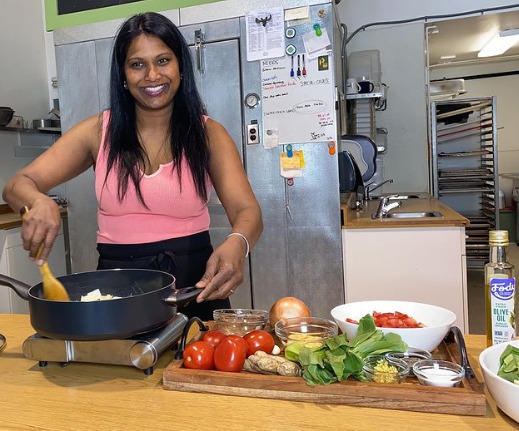 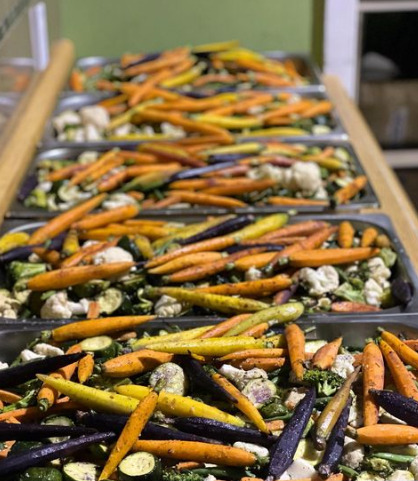 From that space, she’s been able to share some Trinidadian traditions with the Pacific Northwest by cooking extra meals and giving them to those in need. “It’s a belief I grew up with – when you have something, you share something. When my grandmother cooked, she always made extra, so that anyone who came, even a random guest, had something to eat. When someone shows up at the door, you welcome them into your house and offer them something to drink, something to eat, and something to take home with them. It doesn’t matter how small it is. It’s just my instinct now, and when I started my business, that became part of it.”

From the first week of the pandemic until now, Sarah has created 150-250 individual meals every week that go to food-insecure communities and families. This work, which started as Calypso Kitchen, has transitioned into its own project, a 501c3 called PNW Plateful. “I started PNW Plateful so that I can continue doing this work on a bigger scale,” Sarah says. “I’m in the food industry, and I see there’s so much food waste, even if you don’t want to waste food. It just happens. I remember two years ago, I did a catering job and had a ton of food left over. I reached out to Sustainable Connections and it was from that connection that I found the groups that I still provide meals to.”

Sarah is no stranger to innovation in times of change and crisis. “As Calypso Kitchen has grown over the past few years, going through a pandemic, everybody’s said we have to adapt and pivot. That’s kind of our thing, adapting and pivoting. We’ve had to create new ways to stay sustainable and keep being relevant to our community.”

As of now, Calypso Kitchen offers catering services, a line of sauces, spices, and beverages, and cooking classes. “We also operate a commissary kitchen with the intention of providing an incubator and accelerator space for other small food businesses,” Sarah explains.

The food and stories that Calypso Kitchen and PNW Plateful share with the world nourish this community with delicious meals, culinary empowerment, and a spirit of deep reciprocity. 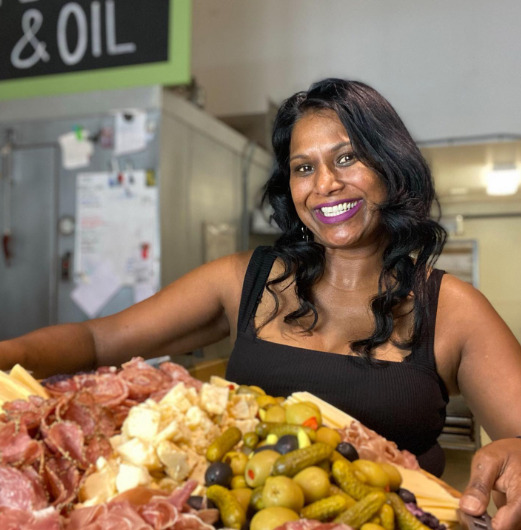 All photos courtesy of Calypso Kitchen