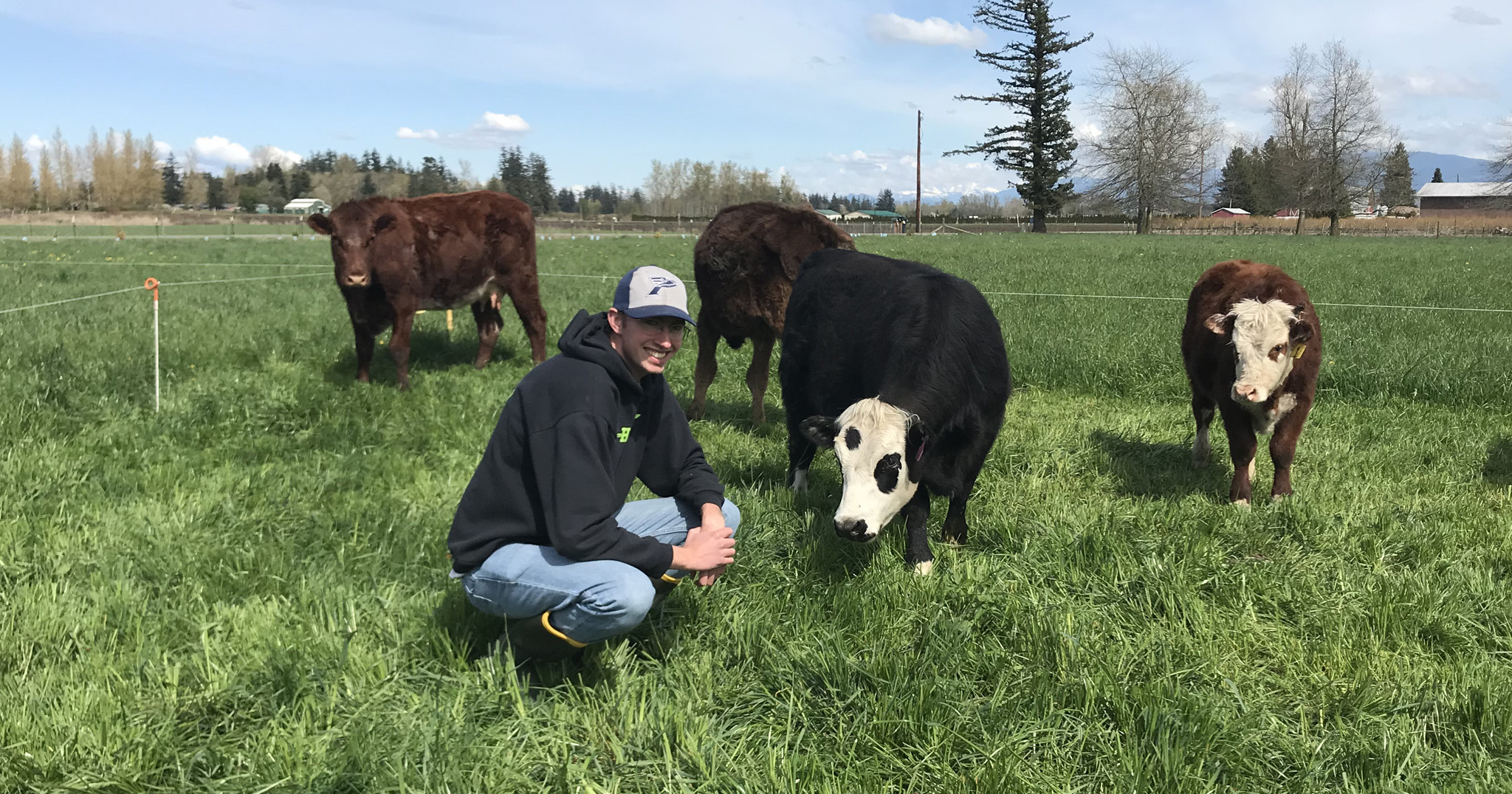 Healing the soil with happy animals

One of the top challenges you’ll hear about in agriculture, and for our world, is topsoil. This component of the Earth enables essentially all terrestrial plant life to exist. And without plant life, humans and other animals would have a hard time surviving. It turns out we’re losing topsoil at an alarming rate, and without intervention, we could lose nearly all of it in our lifetime.

As with many crises though, there is a solution. Using what’s known as regenerative agriculture, farmers can prevent the erosion of topsoil. Let’s take livestock farms as an example. On a typical grass-fed cattle farm, cows are allowed to roam freely over a large area and graze as they please. This is fine when it’s well-managed. Often, though, cows will eat the grass in some areas until it’s almost dead. The grass is focused on survival, so it doesn’t have the energy to develop a deep root system and relationships with beneficial soil organisms. Because of this, it’s not holding the topsoil together as well as it could. 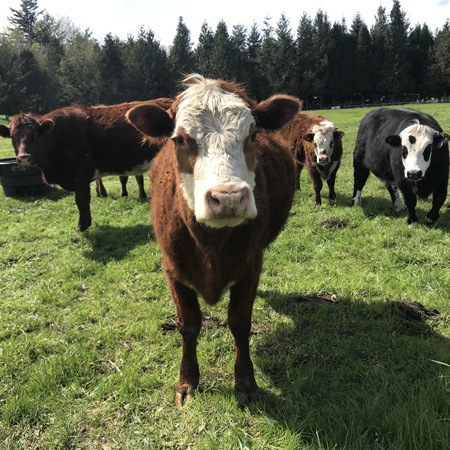 To explore a better way of raising animals, I went out to Oak Meadows Farm near Ferndale to meet with farmer David Whittaker. Young and unassuming, David helped to explain how he raises animals and how it helps to improve the land. “We move the cows at least once a day,” he says, “and that way they’re always on fresh grass and never overgraze.” It’s a system that requires lots of observation but the results are clear. The field is full of lush grass, and the cows are currently grazing an area about 30 feet by 100. They eagerly chomp down the tall grass. The patch they were on yesterday looks like a lawn that’s badly in need of mowing, while tomorrow’s grass is easily knee-high.

“The other benefit is that when the grass is healthy, the weeds don’t grow as much,” David continues. Like humans at a buffet, animals will eat the things they like until they’re gone before they move on to other things. The difference is, when cows eat grass until it’s nearly dead, the thistles and weeds that they’ve been avoiding have free reign to grow out of control. Poor management can lead to a field where the majority of plant life consists of noxious weeds.

David doesn’t just raise cattle, though. He’s currently also raising chickens as well as turkeys, and will be raising hogs, quail, and pheasant this year. Ducks and rabbits have also set foot on his field in years past. All of these animals are managed in active ways that maintain a strong ecosystem and build the necessary layer of topsoil. 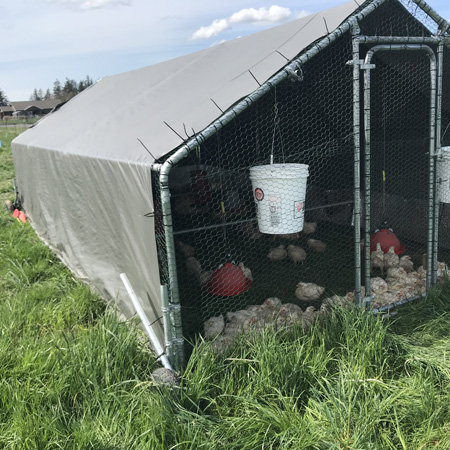 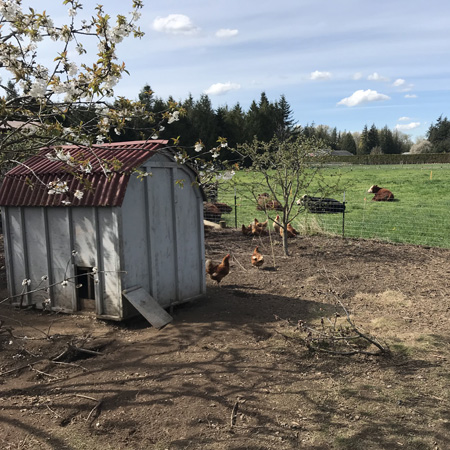 Farmers often have to make practical decisions as well. David would love to expand and build a larger beef herd. Unfortunately, cattle require a lot of land using the systems he has. And grass-fed cattle take roughly twice as long to reach maturity compared to grain-fed cows. This is part of the reason he raises birds. But these come with their own challenges. “I can’t raise the chickens on open pasture” David explains, pointing out two large eagle nests within 200 yards. He instead uses movable pens that allow chickens to be on fresh pasture while still enjoying protection from predators. He boasts an impeccable record of only losing one bird to  ground predators out of the roughly 8,000 he has raised in his career. 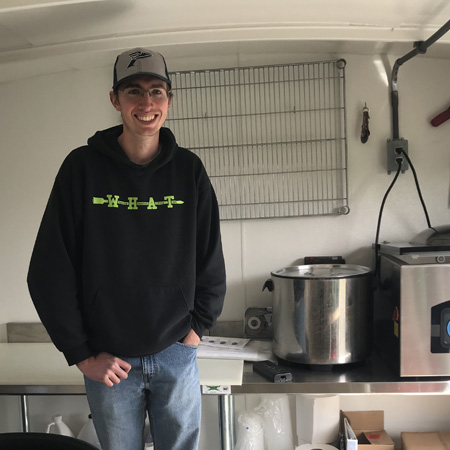 All of this adds up to a few major benefits. Beyond the benefits to the soil, this method of raising animals benefits the animals and ultimately people. The cows look genuinely happy and watching them stuff their mouths with tall, lush grass reminds me of the way I probably look when I’ve spent all day preparing a meal and finally get to feast. The animals are also fed kelp and mineral salts to help keep them healthy. This translates to beef that’s not only extremely flavorful but also highly nutritious.

Oak Meadows Farm represents all that is positive about agriculture. It’s an example of how, with the right methods, farmers can improve the land, raise happy animals, and create happy customers and farmers. By supporting Oak Meadows, you’re investing in a better future for everyone. The best part about all of this is, the way to invest involves buying high-quality meat from a lovely local family farm. You can buy direct from the farm, where starting in mid-May there will be a farm stand open Saturdays from 10am-2pm. You can even get fresh chickens that have never been frozen – something that’s essentially unheard of! Call for availability. You can also regularly find Oak Meadows chicken at Carne Butcher Shop and on the menu at Camber in Bellingham. 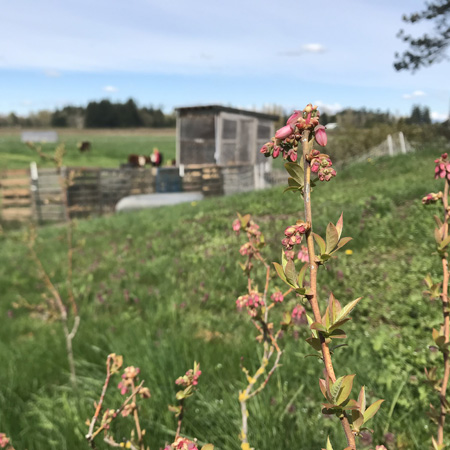 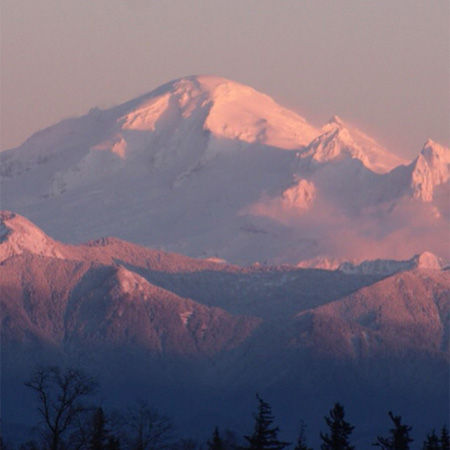 In addition, you can reserve shares of beef, which are sold as whole, half, and quarter animal. You’ll want to act now, though, because only 3 animals are for sale and they’ll be spoken for before you know it. If you have any second thoughts or doubts, I’d encourage you to find a nice Saturday and make your way to the on-farm store and gaze out over the field. Seeing the animals in this beautiful environment, with Kulshan looming in the distance, I know that this is where I’d want to live if I were a farm animal.