In today’s world, healthy and ethical choices can be challenging. Highly processed food and large carbon footprints often seem like the easy choice. It’s rare to find people who are producing healthy food in a way that’s also healthy for the planet. Richard Kauffman of Riverhaven Farm wants to change that by offering food that’s not only healthy and nourishing for his customers, but also harmonious with the Earth.

Tucked away between the Nooksack River and Fishtrap Creek near Lynden, the farm has a quaint charm. An expansive valley reminds you that the Fraser River once flowed through here, and Mount Baker peeks out to the East. Sheep, chickens, and ducks are scattered around the property, along with fruit and nut trees and rows of vegetables. 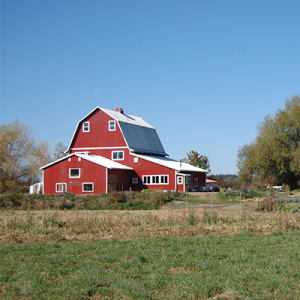 The owner, Richard, has come full circle since his early days of milking dairy cows on the Chippewa River in Wisconsin. He moved away from agriculture to attend school and eventually work for the Centers for Disease Control and Prevention. It was through this work that he was able to travel around Whatcom County and develop a love for the region. It was also through this work that Richard developed his personal philosophy of health and wellbeing.

This philosophy is simple, but was forged as a result of some unfortunate circumstances. After losing money in the 2008 financial crisis he started questioning the trajectory of his life. When his wife developed a medical condition, he was sure that he needed to make a change. To him, the solution was obvious. Returning to a life of farming and raising good food was a way to do rewarding work while being rewarded with the best food imaginable, allowing him to lead a healthy and fulfilling life. In his words, “disease and distraction are symptoms of modern life – the farm is a solution to both.”

The farm is also managed in a way that protects the health of the soil, the animals, and the Earth as much as Richard’s own health. This is another part of the philosophy of Riverhaven Farm. “We aim to mimic nature to produce the best quality food to nourish our bodies in the way they want to be nourished,” he explains as he sits in his pasture and pets one of his favorite sheep, Mocha. (Like a true parent, he refuses to pick any one favorite among the herd.)

In order to understand the management philosophy fully, we need to take a step back and consider how a conventional farm operation works. Most farms produce either crops or livestock, rarely both. In a vegetable operation, the farm is usually reliant on some outside input to fertilize the soil. In a livestock operation, outside inputs are required for food and nutritional supplements. Virtually every operation that raises chickens buys them from a breeder and then has them shipped to the farm. 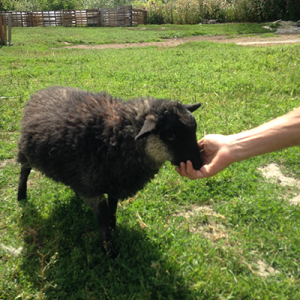 April, a sheep Richard had to bottle feed

At Riverhaven, things are a bit different. Crops and livestock are integrated. Sheep graze on pasture and Richard is growing corn and sunflowers to provide supplemental nutrition for the chickens year-round. He’s continually finding ways to reduce outside inputs and make a more holistic farm, too. A separate chicken coop houses the Red Ranger chickens that will hopefully soon breed all of the meat birds he raises of that variety. One of the duck ponds also contains fish, taking advantage of the nutrients the ducks bring into the ecosystem. These are just some examples of the holistic style of farm management Richard practices.

Another component of the farm philosophy is treating the animals well. Mimicking nature means the animals are living the life they deserve. It’s quite clear that they are as happy as can be. Heading down the main walkway, the sheep sit behind fencing separating them from fresh pasture, Richard tells me that they know it’s the day they get to move to a new section of grass. As soon as he opens the gate to the new pasture, the sheep run out like dogs arriving at the dog park. The chickens are equally happy as they roam around the woods. This habitat provides a lot of natural food for them in the form of grubs, bugs, and worms. It also protects them from aerial predators like owls, hawks, and eagles.

The animals live their entire lives on the farm, right to the final moment. The on-farm slaughter facility keeps the chickens from having a stressful journey at the end of their lives. Similarly, a mobile unit comes to the farm for the goats so that they don’t have to be transported. In the words of Richard, “Working with nature and natural principles to give the animals the best life possible is our contract with the animals so that they can provide us with the best food possible.”

And the food truly is delicious. Individual cuts of lamb, as well as whole chickens, are available for purchase directly from the farm or at the Bellingham Farmers Market. Also available again in August will be ground lamb, which makes a tender, buttery burger that’s perfect for summer. Just be sure to cook it on foil if you decide to grill it – the fat tends to make the coals flare up! (The ground lamb was so popular that it completely sold out.) 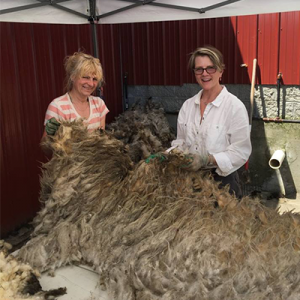 As Richard leads me into the fermentation room to show off his impressive collection of homemade wine, I start to realize that this is more than just a farm. He has created a new life for himself so that he can have the best food and share that with the community. The farm is a happy consequence of this life.

Because the farm is founded on strong values rather than simply profit, the principles of environmental stewardship are baked in rather than being sprinkled on top. Harmony with nature is simply the expectation. The mountains off in the distance are a reminder of the natural beauty that surrounds us, and that can only remain through this type of commitment to environmental stewardship. Adjusting my gaze back down at the sheep happily grazing on pasture provides a promising vision for the future. And this future is a nourishing one!

If you’d like to purchase pastured lamb, free range poultry, eggs, produce and more schedule a farm visit! Riverhaven Farm will also be a part of the 2017 Whatcom County Farm Tour September 9 & 10 this year – spend a whole day with Riverhaven, and other fantastic local farms!